Ep #93: The Decision to Start a Coaching Business 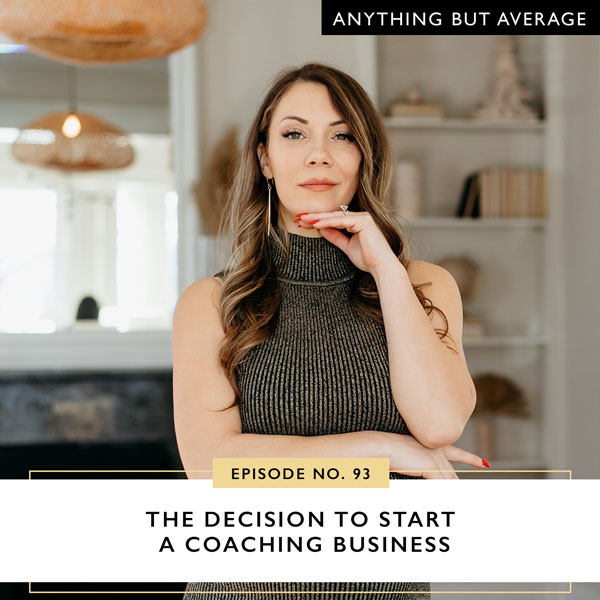 Don’t miss an episode. Subscribe via iTunes, Stitcher or RSS.
Leave me a review in iTunes.

2022 is upon us and I want to kick off the New Year by getting you closer to your dream life. And if you’re here listening, this means finally making the decision to start your coaching business.

The biggest reason I see people putting off this dream is simply because they haven’t made the decision to do it. They talk themselves into it, then out of it, unsure of what to do… and six months later, still find themselves on the fence.

So, listen in this week as I offer the process I use and teach for making any decision. Whether you’re deliberating on joining the program, launching your business, or a decision in your everyday life, you can apply this process to spend the year moving forward and creating the life you really want.

Anything but Average is open for enrollment TODAY! If you want to become a great coach, start your coaching business, and sign clients, make sure to click here to join!

The next round of the Anything but Average Coach Mastermind opens on February 23rd for the spring of 2022 class! If you missed out on this current round, make sure to mark your calendars so you don’t miss out!

What You'll Learn on this Episode

Featured on the Show

Welcome to the Anything But Average podcast where I will teach you how to create a coaching business one step at a time. I’m Lindsey Mango, a life coach passionate about helping you create the life of your wildest dreams by creating a coaching business. Let’s get started.

Hello, and welcome back to another week and another episode of Anything But Average. Guys, happy 2022. We are here, the first official week of the new year. I just love this time, it’s just full of so much possibility. I feel that for me and I feel that for all of you.

And just a reminder, I don’t know how you can miss it, but Anything But Average opened for enrollment today and will close on January 11th. This is my program that teaches you how to become a great coach, how to launch your business, and how to sign paying clients. Go to lindseymangocoaching.com/anythingbutaverage. And I will see you on the inside.

So today what I wanted to talk about is making decisions. And I’ve done episodes about this before but one of the reasons I see people struggling–  You can use this process for anything, I’m going to apply it specifically to deciding to be a coach and deciding to start a coaching business. But this is the same process I use and I teach in making decisions in the program. And in general as a coach it’s what I use in my own life.

And I will tell you guys that one of the most unproductive places to be is indecision. It keeps you safe, that’s for sure. But it doesn’t help you learn and grow. You’d be better off like making, there’s no wrong decision, but making the wrong decision and going forward with it than just staying in indecision.

So today I want you guys to use this episode as an opportunity, whether you’re on the fence about starting your coaching business, whether you’re on the fence about joining. Whether you’re making just a decision in your everyday life, to use this process, apply it so that you can make a decision. And spend the whole year moving forward and building this amazing coaching business and creating the life you really want. Instead of waking up in three more months, six more months, eight more months still waiting to decide.

All right, so let’s jump in. Here is my process for decision making, what I do is I take– I actually talked about this, Chris and I talked about this on a podcast episode of his, The Relentless Growth Podcast. And it was so valuable that I wanted to share it with you guys here.

So here’s what I do, so let’s take the decision of starting a coaching business. On one side of the page at the top I’ll put “Why wouldn’t I?” Put a line down the middle, and on the other side I put “Why would I” at the top.

And I go through and write every single reason why I would and why wouldn’t under the appropriate column. Anything and everything you can think of. So let’s just say for why would you, let’s say some of your reasons are I really want to help people. I feel like I’m meant for more, I don’t know what that is but I truly believe I’m here for a greater purpose.

And you guys, as you’re listening to this I’m sure some of you aren’t writing this out, you can come back and do that. But just continue because there’s a whole process and there’s some things I’m going to touch on at the end that’ll be really valuable even if you’re not going through it in this moment.

But then what I do is I walk through and I write, I highlight or I get a pen and I circle all of the reasons on both sides of the list that are from fear, doubt, limitation, limited thinking. So for example that might look like what are my parents going to think, that’s a fearful thought. That makes you feel doubt in your body. It makes you feel fear and limited.

Now I talked about this on an episode, I forget what number it is, it was maybe it’ll be like eight weeks, five weeks ago, called Decisions Despite Drama. This is how you come to a clear decision. The decision is whichever side has the most reasons coming from faith, love, abundance, and trust. That’s the decision.

I know that’s so simple, but guys, this is how I make all of my decisions. Now at first, this might be a really weak muscle for you. You might feel like you’re going to puke, you might feel scared, you might feel all of these things. But that muscle grows over time and you start to really trust yourself, and trust abundance, and trust faith over the fear and doubt that you have. That’s it, that’s how you make the decision.

Now a couple things I want to note as well, one of my students in Anything But Average she enrolled and three months later she commented on a live that she posted a couple times and then she stopped. And she’s like, “I just am not totally clear, how do I know if coaching is for me or not? And I don’t want to waste all my time doing it and then realize it’s not.” And what I showed her what I want to share with you is that she’s already wasting time because she hasn’t gone all in on coaching.

It would be like trying to figure out if someone is for you, like if your husband’s the person for you playing half-ass, worrying and fearing. And trust me, I’ve been there, that what if they’re not the right person? What happens when you do that? You don’t go all in. You doubt, you don’t show up and then you have all this evidence of why it’s not for you, and all this proof. And it’s not because it’s true, it’s because you didn’t play all out.

So the second thing is you have to play all out. You have to make the decision and go all in on it. That’s how you figure it out. Now, that also comes back to that fear of wasting time, that’s another fear. There’s no such thing. You go all in on it, I’m pretty confident you’re going to find out you love it. And if you don’t, there is no such thing as wasted time or money because it helped get you closer to what you are meant to do.

It rarely happens, I’m not sure if that’s ever happened. But the fear of wasting time is causing you to waste time. The fear of whether you know if it’s it or not is keeping you from the decision that’s actually going to help you create what you really want.

The last thing I want to share about this is the fact that you’re still thinking about this. That it’s still in the back of your mind means that you’re meant to do it. It wouldn’t be here–  I always think about,  I’m going to use such a funny example. Glennon Doyle actually, this isn’t the funny example, but Glennon Doyle, I saw something from her a long time ago and people were like, “How do I know if I’m meant to be a writer?” And she’s like, “The fact that you think you’re meant to be a writer means that you are, period, end of story.”

And I kind of apply this rule when it comes to shopping. It’s like have you ever thought you really wanted something and then you leave it at the store and then you forget about it like it had never ever existed? Versus something that you really love, you leave it at the store and a week later you’re still thinking about it. That’s how you know that you want it.

The fact that you are thinking about coaching. The fact that sometimes it wakes you up in the middle of the night, and you’re daydreaming about the possibility or that you’re still thinking about it for an extended period of time means that you’re meant to do it. Now your only job is to make the decision, get into the program, and we’ll deal with all the fear and drama that’s holding you back. That’s keeping you from even making this decision, that’s going to keep you from going all in, and that’s going to keep you from creating the outcome you want.

I love you guys, this is the hard part. This is the scary part. This is the jumping off the mountain parts that all successful people talk about. But this is the only way to get there. Again we are officially open, Anything But Average is open for enrollment right now and closes on the 11th. Go to lindseymangocoaching.com/anythingbutaverage and I will see you guys on the inside. Talk to you next week, bye.

If you’re ready to take this work deeper and create your own coaching business, join us in Anything But Average where I will walk you through the step by step process to become a coach, start your coaching business, and start signing clients. Go to lindseymangocoaching.com/anythingbutaverage and I will see you on the inside.

I love hearing from you!

There will be many moments throughout your coachin

Your clients haven’t bought because you haven’