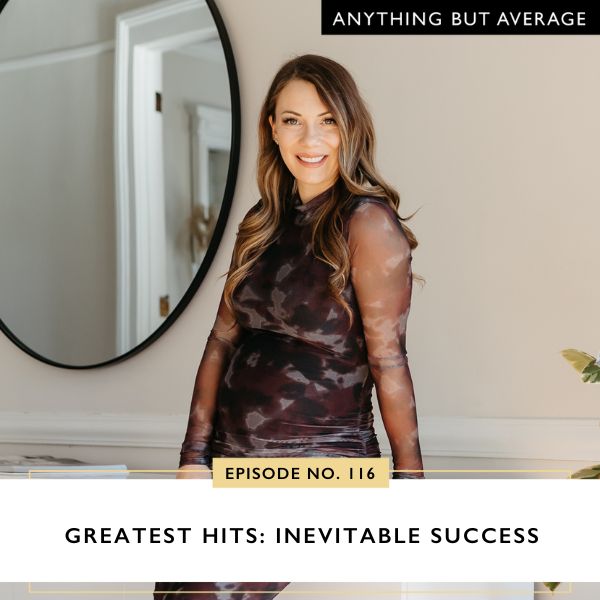 Don’t miss an episode. Subscribe via iTunes, Stitcher or RSS.
Leave me a review in iTunes.

I’ve always found that believing success is inevitable has been a catalyst for doing amazing things. I see it with my clients all the time too. Every decision is easier to make when you already know it’s going to lead to success, and that’s how you build the life of your dreams.

If there’s one thing I love, it’s helping you guys master your mind so you can be effective and create whatever you want. So, trust me when I say that fully understanding inevitable success will transform the way you make decisions and how you show up for the rest of your life. You’re going to love it.

Join me on the podcast this week and discover how to believe that your success is inevitable, no matter what you’re working towards or how far off it seems right now. I’m sharing how embodying this concept has worked for me, and what you can do to start taking action from this place of true and unconditional belief in yourself.

Anything but Average has now closed for enrollment, but doors will reopen on July, 6th. If you want to join the next round, click here and join the waitlist, where you’ll get access to some amazing resources.

The Anything but Average Coach Mastermind is now closed for enrolment. If you want to be in the fall class, make sure to mark your calendars for August 31st.

What You'll Learn on this Episode

Featured on the Show

You’ll also get sneak peek access into the program, into the live coaching sessions, into the portal, and exactly what you get in the portal as well as the results people are creating every 30 days. Again, go to lindseymangocoaching.com/anythingbutaverage and I will see you on the inside.

Welcome to the Anything But Average podcast where I will teach you how to create a coaching business one step at a time. I’m Lindsey Mango, a life coach passionate about helping you create the life of your wildest dreams by creating a coaching business. Let’s get started.

Hello, and welcome back to another week and another episode of Anything But Average. Guys, this is Lindsey from the past coming to you, before Eva was born and before my maternity leave, recording this. And really quick before I jump in I just want to send myself some good vibes to sleep really well, hopefully when this comes out I’m sleeping great. And I’d appreciate it if you sent some good vibes my way.

But I am so excited to introduce to you guys the greatest hits podcast series where we have taken the six most listened to, most sought out podcast episodes, not just from the Anything But Average podcast, but from my original podcast, Soul CEO. If you haven’t been with me from the beginning that was the old name of my podcast.

We have dug into those archives to find some of the favorite podcast episodes from that podcast as well as the current podcast, and we are bringing them to you over the next six weeks.

So have fun, enjoy some of our most sought out topics, and I also want to offer that you’re going to hear such a shift in me from my old podcast episodes to my current ones. And that the old ones are going to be a little bit more broad and general for life, and some of the newer ones are more coach specific. But all of them are here to add tons of value and offer you an opportunity to hear some of our greatest hits.

So, with that being said, let’s jump in.

And before we jump into how you actually can create that, how you can actually believe that your success is inevitable with whatever goal you’re working towards, I just want you guys to think about it for a second.

Close your eyes, as long as you’re not running on the treadmill or driving your car. And I want you to imagine what it feels like to think that your success is inevitable. Like it’s done, it is already in the cards for you, it is completely inevitable. What does that feel like for you?

When I close my eyes and I think about that, I feel just this expansive energy in my chest. I feel calm. I feel peace. I feel certain, which I talked about on a previous episode, right, certain energy versus urgent energy. It feels so good. And I want you guys to just sit with that for a second because that’s what we’re going to talk about creating today.

And you guys know that I’m all about mastering your mind in a way that really serves you creating the result and the life that you want. And you just kind of tapped into what it felt like to think about inevitable success and how expansive and how certain it was. And so, I want to teach you guys how to create that.

So, today I’m going to teach you how to actually create that. Now that you have this desire, you’re like, “I want to feel like my success is inevitable.” And for me, I will tell you guys, just having that thought and going back to and stepping into it, even if sometimes my brain is like, “Are we certain?” I still can feel into it. So that, by itself, is powerful. Like, reminding yourself and allowing yourself to believe in the possibility that your success is inevitable.

But you guys know I’m about teaching tangible tools. So first, there’s a couple of steps that I want to walk you through to actually embody that, feel that, and get grounded in this idea of your inevitable success. So, first, our brain loves to spend all of this time looking at all of the evidence of the gap of what could go wrong.

It’s literally wired like this to protect us, to keep us safe, to keep us from having high hopes and failing. It would almost just rather have low expectations because it feels better, you don’t have to experience the failure.

And I want you to look for all the ways. You might have to stretch your mind at first. Your mind might be like, “Well, let me remind you of all the times that your success was not inevitable or you weren’t successful.” But I want you to purposefully shift your mind to look for all of the ways that you are the person that your success is inevitable.

It could be like, you’re growing. You grow all the time. You’re listening to this podcast which means you get better every single day, which means that your success is inevitable.

Now, again, you guys might not be where I am yet, but I want to offer you my mind, my brain, so you can borrow it and see where you ultimately want to get with this. And we’ll cover that in the third part of this, of how to actually build that.

Something else I believe about myself is that I can handle failure. It’s that I am willing to keep getting back up, which means that no matter how many times I fail no matter what shit storm happens in life, I’m going to keep going.

I also know that I have hired the coaches that I need to help me make my success inevitable. They won’t let me off the hook. That’s what I do for my clients. That’s what investing in a coach does for you. Even if you doubt your ability to keep showing up, you have made a commitment that you have someone on your team and on your side that won’t allow that. That’s what I do for you when you work with me, when you hire me. So, I have that thought. It’s impossible for me not to reach my success.

I have the thought that I would rather die trying than not try at all. And to me, that also means inevitable success. So, just so you guys can get a snapshot of my brain, that’s what I think about myself that allows me to believe that my success is inevitable.

Now, here’s the thing. You might hear that and you’re like, “Okay, I do not believe these things about myself yet. And that’s where part three comes in. I’ve done this on a past episode when Soul CEO was a thing. I’ll probably do it on another episode in the near future so we can cover this even more. But it’s what I call bridge thoughts.

Basically, bridge thoughts are a way to bridge the gap from where you are now to the thinking that you want to have. So, let’s just use one example. Let’s just say the future thoughts is, like, it’s just who I am. Who I am is somebody who it’s inevitable that I’m successful.

So, if that’s the thing you want to believe, and let’s just say your current though it, like, “I give up sometimes. I’m not really all in. I don’t know if my success is inevitable.” I want you to imagine that there’s that thought on one side of the spectrum, and then there’s the future thought that you want to have, which is, “It’s just who I am.”

How can you see that that means that you’re becoming the person whose success is inevitable? Find something you believe. You’ll know you believe it when you feel it in your chest. So, that’s how you’re going to want to bridge the gap.

And here’s something else I want to offer you guys that’s a process. So, what you can do is write a list of where you’re at now, what you would have to think in order to believe your success is inevitable, and bridge the gap on every single one of them. I would do that every single day until that became just a part of who I am and I was going to bridge that gap from the new where I am to the future of my success is inevitable and continue to do that like you’re building a muscle.

Now, the last thing I want to share with you is I truly believe my success is inevitable, and maybe you do too. Like, maybe you can really feel into that. But sometimes, in the moment, in the small wins and losses and the day to day, I forget that. So, I just want to offer that this is something you’re going to need to remind yourself over and over again.

If you’re ready to take this work deeper and create your own coaching business, join us in Anything But Average where I will walk you through the step by step process to become a coach, start your coaching business, and start signing clients. Go to lindseymangocoaching.com/anythingbutaverage and I will see you on the inside.

I love hearing from you!

Your life is too precious to take so seriously you

Ask better questions and you’ll get answers that